Home > fiction1 > Uncategorized > Just a little more….Life!
She found herself running endlessly towards the light
at the end of the tunnel. It was as if she would breathe only if she reached
that light. She looked around just to find pitch darkness; she felt tired at
times but could not stop and kept running. She would look around again and
again but it was too dark to see anything. She did not understand what made her
run; she did not once look behind. The road looked endless, one look at her
made her feel she was feather light. She wore a white satin gown, free flowing,
weightless.  She looked around again and could see her face on the
wall of the tunnel, her face looked radiant, it had the glow she had never seen
and she felt happy like never before and beautiful than ever. Where the light
wrinkles she had seen a couple of days are gone? She thought to herself as she
kept running. She turned her face to the other side of the tunnel and could see
a girl in a mother’s arms; the mother delighted looking at the bundle of joy.

There were people whom she recognised and some she didn’t. She placed her
fingers on her brow and tried to recollect a man standing next to the mother
but just couldn’t. She looked again and saw a young girl in school listening
attentively to her teacher; the image vanished in a jiffy. She could then see
her young self with her best friend laughing and enjoying. When was the last time
she laughed that loud, she wondered? By now the images on the walls of the
tunnel had completely captivated her and she had forgotten of the tunnel, the
run and the distance. She could see her beloved on his knees holding a ring
proposing her, she hadn’t been so happy ever. These flashes would appear and
disappear rapidly and being replaced by the next one. She wanted to think or
say something but was not able to. She saw her husband and daughter sitting on
a dining table praying. She wanted to run towards her daughter but couldn’t
change course of her path. 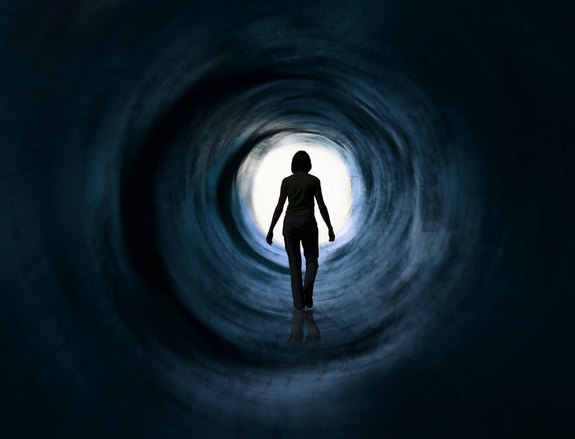 She closed her eyes but could see the images, the ones
she saw on the wall. Everything was clear when she heard shouts and opened her
eyes startled. She was confounded and looked down; she saw her feet were above
the ground as she ran towards the light. Completely mystified she tried to stop
running but couldn’t stop her feet. She heard shouts again and a big thump on
her chest as if a train in full velocity had hit her chest, she ran faster
towards the light and another big jolt! She couldn’t contain it in herself any
further. She was perplexed at the thought of her running without her feet on
the ground, the light at the end of the tunnel seemed very far now.

The last
one came as a thunderbolt pushing her on her chest so hard that she fell
backwards as if being sucked by the vacuum towards the other side of the light.
She could see being pulled and the light at the end of the tunnel vanishing in
a distance. It was so quick she had no time to react. The ‘pulse is back,
doctor! She is back!’ ….the words sounded like a distant echo….’it’s a miracle,
doctor, the defibrillator worked!’ She opened her eyes at a hazy frame of a man
in a white coat and a young woman standing next to him.